The capital of Samos, called Samos or Vathi, constitutes the largest municipality of the island, and of the entire Prefecture. The city acquired its current form after the unification of Samos with the rest of Greece (1913), whereas earlier it was divided in Upper and Lower Vathi. It is built amphitheatrically, beginning up the hills and reaching all the way down to the sea, around the gulf. In antiquity, there used to be a city in the same area, while during the Roman and Byzantine times it was a settlement which, in the years of the Hegemony, expanded and turned into the capital (1854). The modern city of Samos is the administrative center of the island, while it maintains its picturesque figure, with its neo-classical buildings and its traditional neighborhoods.

Walking down the picturesque Themistocles Sofoulis coastal avenue is followed by a stroll down Lycurgus Logothetis Street, where the main market of the city lies. It is the complete package, down a road with various shops and buildings, in a course through the Municipal Garden (park) and the Square of Pythagoras and its Lion.

After visiting all the above, you can take the road up the more densely-built part of the city, Upper Vathi (Pano Vathy in Greek). Enjoy the narrow alleys, the public water taps, and all artifacts in which the spirit of former centuries lingers.

In Vathi you can find tourist agencies, hotels and rooms to let, either in the center, or at the suburbs, you can rent a car or a bicycle, eat in one of the numerous restaurants, do your shopping, and enjoy your nights out. There are several summer bars, mostly along the way from the harbor to the Hospital, right next to the sea.

Things worth seeing in Upper Vathi: 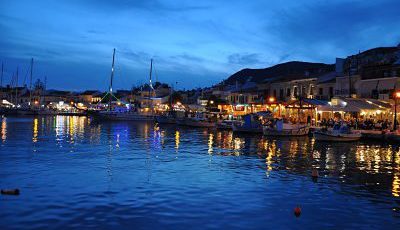