The Ditch of Eupalinos is one of the most pioneering and important technical works of ancient times. The capital of Samos, during the golden era of the tyrant Polykrates, had increased needs of water supply, which was not available in the area. Therefore, Polykrates appointed the study and the drawing of a system for the transportation of water to the then known architect-engineer, Eupalinos from Megara. The project begun with the perspective that water would be carried from a nearby spring, which was located behind the today’s hill, which is located above the city of Pythagorio. Hence, an underground system for the transportation of water was designed, which would cross the hill and end up to the tanks of the city. Eupalinos studied that the opening of a double-edged tunnel in the hill would save time. Thus, two groups started from the respective entrances, which met with a minimum deviation! This achievement is considered important, because the scientific methods of measuring and drawing achieved something, which, for that time, was considered extremely difficult. The tunnel, of a length of 1036 meters, took more than 10 years to complete, but it constituted a work, which was used until the first centuries A.D. The remaining network constituted from underground clay pipes and had a total length of approximately 2.5 kilometers. Today, part of the Ditch of Eupalinos can be visited and constitutes a different type of an ancient place of interest. You can reach it from the road of Pythagorio towards Vathi, by following the signs (on the same road for the ancient theater and Panagia Spiliani) or even from the center of the city on foot. Telephone of Archaeological Site: +30 22730 – 95277 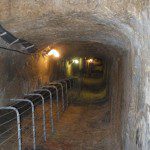 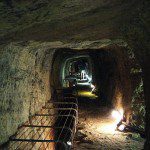