The typical Samian cuisine is not much different than the others of the rest of the Aegean. The main ingredients are the olive oil and the local products, which were always accompanied by wine from Samos.

“Keskeki” or “giorti”. The official festive dish, cooked in pots in big quantities and is distributed on the day of the celebration to the whole village or parish, which was usually sponsored by one family, which made all the preparations. In the eastern Samos, it is produced with wheat and meat, whereas during the fasts the meat is substituted by chickpeas. In the western Samos, instead of wheat, they use rice.

During the Easter, the residents of Samos do not skewer, but they prepare their food and they place it in the ovens of each house or neighborhood early in the morning. The over is sealed with a rock and mud and it opens after the end of the Vespers of Love (“antilampro”) on Easter Sunday. The kiddling (shoulder) is made stuffed and it is accompanied by potatoes or pasta.

The “loukoumades” (donuts) is a dessert that accompanies the Samian customs, as much as the wine. They are offered in the official celebrations, in the festivals, on the namedays, in weddings and christenings, on the New Year, on the day of Agios Andreas “in order for the pan not to get holes”, as the folk tradition says, as well as during the vigils (official big vespers) of the small churches.

Although the “tiganites” (pancakes) are produced in all other Greece by porridge, in Samos they are made of dough, which is formed in small pitas of a diameter of approximately ten centimeters, which are then fried in oil and are offered with grated cheese or honey. The “anevates” are also small pitas from bread dough (with sour-dough), which are opened by hand and are fried, in order to be eaten with grated cheese, honey or “petimezi”.

“Revithokeftedes” (chickpea-balls): It is a popular dish in the Aegean, but always different in every island. In Samos it is a characteristic appetizer, and we suggest that you should taste it.

The “pichti” is boiled pork meat.

The “paspalas” is pork lean and fat cut in cubes, which is boiled and then it is dry-salted, aromatized with “throumpi” (similar to thyme). It is stored in a glass container and is usually consumed during the winter.

The “kavlikani” are the green spears of the onions, which, before they bloom, they are cut and they are added in an omelet or they are made a pie.

The “Skordapsi” are the bulbs, which are collected and boiled during the spring.

The “katades” is a Christmas dessert, which consists of dough stuffed with nuts and honey and is sifted with icing sugar.

The Samian nature, though, also offers many fruits of a high gastronomic value. First of all, we have the “manites”. Mushrooms in Samos are an excellent dish, as well as a popular prey of the people of Samos, especially during the autumn, after the first rains, when they sally forth to the “ntamaria”, which are areas with many mushrooms, and collect them maniacally. They usually eat them baked, as well as cooked. Some species in the local dialect are the following: “koumarenies”, “mouskenies”, “spartenies”, “koprenies”, “piperenies”, “katsoulakia”, “agkathenies”, “pordes”, “logadia” and others. The “ovries” or “avrounies” are sprouts, similar to the asparaguses, but with a different taste, which are eaten either raw or in omelets. The Samian figs are the following and some of them can also be dried. The “stournelia” are small white figs, the “arkounes” or “mpouknes” are small rectangular figs, which are yielded twice a year, the “magiatika”, which are big in size, and the “asprosika”. Out of the herbs, the one distinguishing is the “flaskouni”. This globally famous herb (officially named Mint), with the scientific name Menta Pulegium, is known from the ancient times, when Theophrastus from Eresos mentions that the Samian one is the best in quality. It is collected and dried, in order to become a boiled drink, just like tea. Moreover, ever since the ancient times, its distillation gave an aromatic “raki” (arrack), which was usually added to the wine. 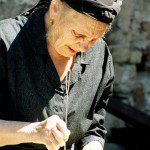 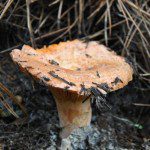 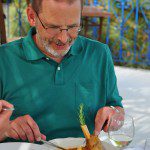 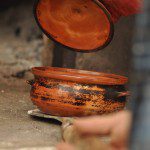 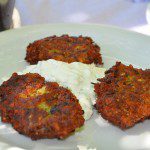