The Vineyard – Cultivation, harvesting and wine-making

When Dionysus gifted Samos with the vineyard, it was as if he was baptizing the island and identifying it with it. Since ancient times, Samos was famous for its wine, whereas as years passed by, all the excursionists described it, they always stressed that it was full of vineyards. Nowadays, many varieties are cultivated in the island, such as the Fokiano, the Kolokithato and the Sultana, but especially the Moschato grape, with the small grapes, which constitutes the dominant variety and provides one of the best and awarded sweet wines of the world, as well as excellent dry white wines. The production and disposal of the wine by the Association of Wine-Makers of Samos was one of the first processing activities. The Association collects (up until today) the whole of the quantity of grapes from the local unions of each village and produces a big variety of wines, which they dispose to the market. Moreover, the AWMS exports large quantities of wine to many countries. The Catholic church of the Vatican uses exclusively sweet wine from Samos, in order to use it for the needs of the Holy Mass.

The cultivation of the vineyard is a particular process, which requires hard work and hobby-horse. From January until March there is the trimming for the preparation for the new year. Following that, there is the digging and the fertilization. In May there is the “argologima”, which is the removal of selected leaves and spears, for the better air circulation and the healthy grow of the fruit of the vineyard. What follows is the spraying with sulphur and other biological or no means, in order to cope with diseases. During the period of August-September, there is the harvesting and the transportation of the grapes to the Association. The harvesting constitutes a special task, during which, as happened in the past, many families or friends gathered on the one day for harvesting at the vineyard of one family, and on the next day they altogether go to that of the other family. Such “interchanges” show the co-operation spirit between the residents of Samos. The procedure starts early in the morning and ends before the sun sets. The grapes are gathered in baskets or crates and, by means of the agricultural vehicles, they are transported directly to the premises of the Association. The grapes selected for the production of dry wines go directly inside the wine press, whereas those selected for the production of sweet wines, stay for some days in the sunshine, in order to take the sun, and then they end up inside the wine press. Apart from the wines, Samos also has a unit for the production of raisins (sun-bathed grapes, which are baked in a bakery with wood, which are aromatized with laurel leaves) and moustalevria (dessert with must). Other derivatives are the petimezi, which is a sweetener used just like honey and comes from the sun-bathed boiled must, to which the ferment procedure has been interrupted. In the past, after the harvesting, the baskets were carried by means of a horse or a donkey to the stafilodochos (grape-tank) (entrepôt located in central points of the vineyard) and then to the Association. In the past, the producers also wined their crop and they carried the must inside the “dermatia”.

Before the establishment of the Association, there were the wine presses and the taverns. The wine presses were buildings, where the grapes were gathered, in order to be stepped on. The must was coming out from a hole and ended up in the “polimi”, which was a tank inside the building, from where the transfusion was taking place by means of a special container, the “metro”, to the barrel. The wine presses had space with barrels, from where each producer was then taking their must, by means of the “dermatia”, and carried it to the warehouse of their own house in their own barrel. The taverns were trading the must and the wine and they had no relation to the term, as we know it today. They were must and wine warehouses, while at the same time the building might be hosting a wine press and a winery. From there wine and must were sold and, apart from private individuals, the tradesmen carried the wine with their caiques (small boats) and they exported them to other islands or Minor Asia. 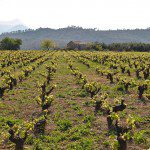 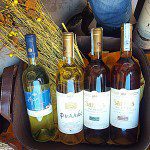 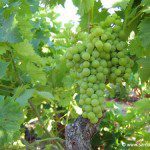 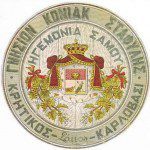