During the Roman years, the entire Hellenistic spirit that had proceeded disappears, Samos being an insignificant island in the vast Roman Empire. However, there remains some activity, as some Roman buildings are crafted as additions to the temple of Hera, as well as in the entire area where Pythagorion lies today. The wanderer Lucius Apulius visits the island during the second half of the 2nd century a.D., noting the existence of numerous vineyards, and the fact that the temple of Hera is almost intact, hosting treasures that indicate the wealth of the offerings to the goddess.

Later on, the Byzantine Empire drastically combines the island with the intensely Christian element, whose rich inheritance lingers on to today. Already in the 4th century a.D. we have Bishops, while in the 7th century, Samos is included into a Byzantine “Prefecture”, based in Smyrna. Monasticism blooms in the island during that period, in the region of Kerkes, and in the Mass Book of its founder, St Paul Latrinos, much useful information is mentioned. There are also records by Bishops of the 6th century about the ruins of the castle in the area above the village of Kontakeika, as well as about the remains of the ancient city of Samos, where Pythegorion is situated today. Also, Christian churches are constructed on top of ancient temples, but the island remains in decay, as it is being ravaged by pirates and conquerors like the Syrians, the Franks (after 1207A.D) and the Venetians, who establish a commercial station. After the fall of the Byzantine Empire, the island is taken by the Turks, and its population is radically diminished. People of Samos flee, mostly to Chios, which was protected by the Genoan family Ioustini, and only a small proportion of the population remains, mostly inland, so as to be protected from Arab pirates, and of the raiding attacks of the Turks.

After 1550A.D the Turks decide the re-colonization of the island, under the initiative of the Ottoman admiral Kilitz Ali. He is given permission by the Sultan, Suleiman the Magnificent, and aided by Sarakinis, of Patmos, who becomes the first settler. The existence of certain privileges by the Ottoman ruler, as well as the prohibition of Muslim settlers on the island, creates attractive conditions for the return of a great part of the population (Samians who had migrated, along with Greeks from various regions of Greece, such as Peloponnesus, Euboea, Pelion, Epirus etc).  Hora City becomes the capital, and a new self-government system is introduced, with the Potentates administering justice and being responsible for taxation. The Church takes up spiritual and educational work and supports the citizens’ unity. 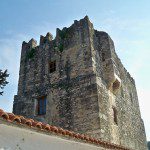 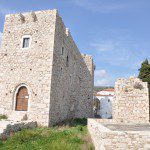