Samos is principally alpine, with two main Mountains, which contribute to the climatological conditions and the vegetation. One is Mt Kerketefs (or Kerkes).With an altitude of 1434meters, at its peak called Vigla, it figures among the very highest mountains of the country. Kerkes belongs to the Western part of the island and is rather poor in vegetation. The other one is Mt Karvounis (or Ampelos) with an altitude of 1160meters, its top is named Profitis Ilias, it lies at the central and eastern part of the island, and it’s overgrown with vegetation.

Plains are scarce and limited by surrounding mountains or hills. The most noteworthy ones are the plain of Hora (or Tigani, meaning frying pan), the plain of Vourliotes, of Vlamaris, of Mesokampos, of Karlovasi and of Marathokampos. The only natural harbor of the island is that of Vathi, whereas the ones in Pythagorion, dating from the age of Polykratis (4xx B.C), and of Karlovasi, are man-made. There exist numerous glens and torrents, the most significant of which are Imvrassos (or Parthenios) in Myloi, known from Mythology, Chisios in Mytilinioi village, Kerkitios, which springs from the respective mountain and ends in the area which is nowadays called Potami, while there are reports for Amfilissos, which crosses the villages of Pyrgos and Neohori, and for Ivitis, whose exact location is yet to be determined. 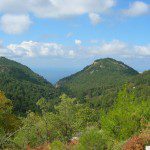 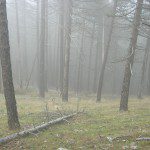