Karlovasi is situated at the northwest of the island, in a plateau formed by two mountains, Kerkes and Carvounes.

The city of Karlovasi consists of different settlements, which were established on different periods, some at the plains and some at the hills, according to the needs of that time. Nowadays, the Municipality of Karlovasi consists of all these settlements as well as the villages of the surrounding area. Historical evidence proves that it has been inhabited since antiquity, while there had been an obvious prime during the Byzantine era, specimens of which are mostly temples (Agios Nicolaos and Metamorphosis constructed in the 11th century, various Byzantine chapels and ruins), as well as a marvelous castle which climbs up the rocks above Metamorphosis Church at Potami, dating from the Genoan occupation.

Nowadays, Karlovasi is the second largest city of Samos. Its prime is largely due to tourism, as well as to the presence of the army and of the Aegean University.

In presenting Karlovasi villages from the west to the east, we begin from the oldest settlement, named Palaeo (=old) Karlovasi, located in verdant hills, within a glen with planes and kalmias. It is virtually invisible from the sea, and it constitutes one of the most traditional villages of the island. It has been inhabited ever since 1600aD, perhaps even earlier.  Its trademark is Agia Triada, a lovely temple on top of the highest hill, which offers an enchanting view of all Karlovasi villages. To get there you must take an exquisite stroll in picturesque alleys.

On our way down, we reach Limani (= harbor), which was constructed in the late 18th century. In 2009, a new section was added to the port, so as to cover the growing needs of this part of the island, and also the lack of space for the docking of pleasure boats, yachts and merchant ships. The main street maintains the atmosphere of the beginnings of the previous century, with double-decked stone buildings in classical design. Here, along with Hotel facilities, you can also find anything you desire, from super-market stores, tourist agencies, cafeterias, to restaurants, an open-air cinema, and clubs, which make for a powerful attraction, all year long. Don’t forget to visit Limani in the morning, for breakfast and coffee, but at night as well, for a dinner by the sea, and for nightlife. What is more, Karlovasi hosts one of the two main Samian United Winers Corporation facilities. After the celebration of the 15th of August, Dekapentavgoustos, when vine harvest commences, tractors line one behind the other in the coastal avenue, to deliver the fruit of a year’s efforts, to produce the exhilarating wine we drink.

Leaving Limani, we head right towards Mesaeo Karlovasi. Here is where we find the great church of Eisodia tis Theotokou. The stone square, shrouded in houses of traditional architecture, hosts many restaurants, where we can taste local delicacies. At that very square we find the Monument for the Revolution of May 8th, 1821.

Crossing the bridge over the wide torrent that cleaves this area, we find ourselves in Neo Karlovasi. It is amphitheatrically built, and is the urban center of all Karlovasi villages. You will find all local authorities here, the Town Hall, the University, a cinema-lovers club, lots of schools and a Health Center. There are plenty of free municipal parking spots, where you can leave your vehicle while wandering and feeling the serenity of the town’s streets and market.

It is really worth visiting the building of Porphyriad School, across the Town Hall Square, and the neo-classical building of the legendary School of Commerce, which is now owned by the University. Also, don’t miss the chance to visit the Eparch Cathedral of Kimisis tis Theotokou (Dormition of Madonna), just beyond the Hegemonic (magisterial) Manor, as well as the Folkloric Museum, the Matrona Temple with its carven wooden chancel and, finally, the Chatzigiannis Maiden School, where the University Library is housed today.

Heading towards the sea, at the  most easterly part of the Karlovasi villages, we find Ormos ( or Riva), a place that used to be a merchandising center ,which flourished during the years of the Hegemony, and up to the years between the two World Wars, when it started to decay. From the imposing church of Agios Nicolaos, you can head to area that used to house the old tobacco warehouses, the neo-classical mansions of the wealthy tanners and merchants, and the impressive tanneries.

What is left portrays the extent of prime that this town lived, particularly in those districts. It is also worth seeing the modern tannery museum in facilities exploited by the Aegean University; it is situated before the seaside road, when heading from central Karlovasi to Limani.

To the west of Karlovasi, after Limani, we reach the famous Potami beach, the Temple of Metamorphosis (one of the oldest ones on the island), the ruins of the temple of Agios Nicolas, the waterfalls, and the well-preserved path that takes us there.

If we proceed past Potami, after half-an-hour’s walk, we get to Mikro (=small) Seitani Beach and in another half hour we get to Megalo (=big) Seitani, a refuge for the Monachus-Monachus seal, protected under the NATURA 2000 project. 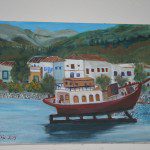 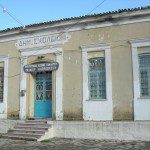 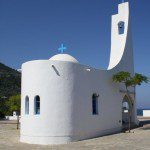 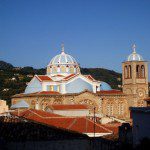 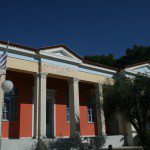