The Archaeological Museum of Samos (tel. +30 22730-27469, 25304) is located at the centre of the city and consists of two buildings, the old “Paschalio Archeofilakion” (1912) and the newer one – with the expense of VOLKSWAGEN (1987). The collections include archaic sculpture, pottery, copper, ivory, wooden, ceroplastics and micro-craftsmanship, as well as many other archaeological findings of the pre-classical and classical ancient times and the Hellenistic era. Some important exhibits are the colossal “kouros” (male statue), of a height of five meters, which is a work of the archaic era (beginning of the 6th century B.C.), the constitution of Geneleo – presentation with a group of statues, amongst which Filippi and Ornithi – which was a dedication of the sculptor to the Hereon (560-540 B.C.), the marble status of a dressed woman – dedicative item of Chiramiis to Hera, as well as other statues of “kouros” (male statue) and “kori” (female statue). 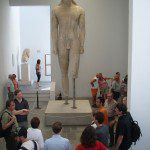 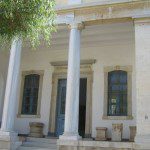